Only make your C# methods async when needed

C# async methods perform an allocation to start the async state machine. If your code has checks that don’t require async, try to separate the method’s code into sync and async portions.

You can follow along with the repro steps and see how this works yourself if you have Visual Studio. Visual Studio comes with a tool called ildasm that we need to view the generated IL from compiling the code. If you’re using JetBrains, the dotPeek application has the ability to decompile to IL but I haven’t tried it.

The first step is to create a new ASP.NET Core Web API application. Use the Visual Studio new project dialog or the dotnet CLI to create the project.

The default webapi template has a WeatherForecastController as an example. We’ll build a service to time how long the request takes and invoke it via middleware. Create an interface called ITimerService with the following code:

We don’t need to fill out this interface but we will create the middleware. Create a new class called TimerMiddleware with the following code:

We only want this middleware to time calls to the WeatherForecastController. There’s no need to register the middleware as we only need to compile the project to see the IL generated for the middleware class. Open a Developer Command Prompt for VS 20xx and enter the command ildasm. This should bring up a GUI tool. From the tool, open the new DLL (e.g. WebApplication1.dll) built for the web application (from the /bin/Debug/net6.0 folder). You can also drag the DLL file onto the ildasm application to open it up. Find the TimerMiddleware class in the tree. 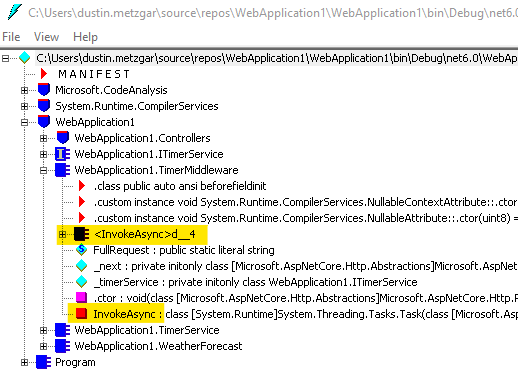 Notice that we have a method called InvokeAsync which matches the code. But there’s also an inner class called <InvokeAsync>d__4. If you double-click on the InvokeAsync method, you’ll see the IL and it should contain lines similar to:

In the highlighted lines and in between you can see that a new <InvokeAsync>d__4 object is being created (newobj). The new objects fields are populated and then the get_Task method is called. What you won’t see is the code that checks the path segments for “weatherforecast”. The inner class with the strange name implements an interface called IAsyncStateMachine. The async and await keywords are signals to the compiler that it needs to create one of these state machines. The actual code for the method is contained within the MoveNext method in the state machine.

Notice that the InvokeAsync method is not marked with the async keyword. It returns the Task object from other methods. Build this and load the assembly in ildasm. The middleware class’s structure should look similar. The inner class for the async state machine will be named after the TimeRequestAsync method. The most significant difference is in the IL for the InvokeAsync method.

On lines 18-20 you can see the call to PathString::StartsWithSegments to check for "/weatherforecast". What you don’t see is the creation of a new object (newobj) in this code. That happens in the TimeRequestAsync method so that it can start the async state machine. Since the InvokeAsync method doesn’t use the await keyword and returns the Task objects from other method calls, it avoids an allocation and the execution of an async state machine if the path segments don’t match.

The impact of avoiding a single allocation is very small. But the cumulative effect in performance-sensitive areas of your service (like in middleware) can reduce the amount of time spent in garbage collection.