WCAT is a powerful, lightweight, and free tool for generating HTTP load. Here I will show you how to use it to simulate user traffic watching media content served by Azure Media Services.

Use Fiddler to examine the requests

First let’s start with Fiddler. Open up Fiddler and navigate to http://smf.cloudapp.net/healthmonitor in your browser. This is an example Silverlight player provided by Azure Media Services. You can point it to a media asset that you have on your own website. Or you can use the example animation: Big Buck Bunny. For this article, I’ll use the default example.

With Fiddler capturing traffic, start the presentation and let it go for about 30 seconds. 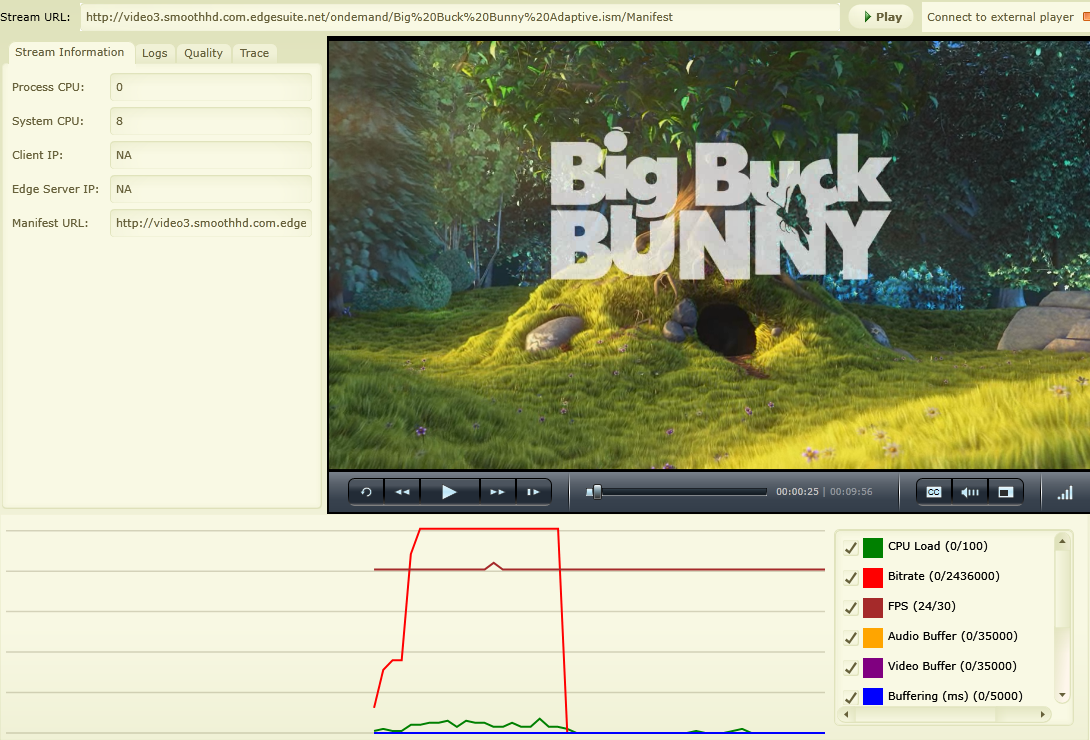 Let’s look at the first few requests that Fiddler captured:

Since this is a Silverlight player, the first request is to the clientaccesspolicy.xml. This step isn’t important to include in the WCAT script so feel free to delete it from Fiddler.

The next request is to get the manifest. Fiddler should recognize this as an XML. IIS smooth streaming manifests are in XML format. HLS, HDS, and DASH all use their own formats. They all have similar types of information. Let’s look at the contents of the manifest:

There are typically two stream indexes. One for video and one for audio. They will have QualityLevel nodes indicating details about the varying bitrates. Here we can see that 2,436,000 is the top bit rate with 1280x720 resolution.

After the quality levels lie a ton of “c” nodes. The “c” stands for chunk. The StreamIndex node indicates there are 299 video chunks. The chunk nodes indicate the order number “n” and the duration “d”. The duration can vary chunk to chunk so the manifest lays them all out explicitly. There is an optional attribute to indicate how many times a particular duration is repeated, but that’s not used here. The player will use the offset and not the chunk number when requesting the fragment. Notice how in the list above the video fragment requests are 20000000, 40000000, and 60000000.

The audio stream index has the same number of chunks but only one bitrate. The audio chunk sizes are inconsistent compared to the video chunk sizes. The player is responsible for doing the math to determine the right fragment request URL.

Simply viewing what requests were made leaves out an essential component of how a player works. Timing is also key. If you watched Fiddler while the media was playing you would notice that there is a buffering phase where requests seem to be made quickly. Once the buffer is full, requests to get fragments happen on a regular cadence every two seconds. The request for the audio and video fragment are made at the same time.

Different media formats will have different request behaviors. For instance, smooth streaming starts at a low bitrate and depending on the response time will gradually increase the bitrate until reaching an optimal level. The optimal level can be less than the highest bitrate if the size of the window where the media is played is less than the resolution of that bitrate. Other formats may stick with one bitrate or may try for the optimal bitrate first and adjust downward if necessary.

Trim your Fiddler capture to the sessions you want to keep. Go to the File menu and choose Export Sessions -> All Sessions. Choose WCAT script as the output format. The script will look something like this:

This is only a piece of the script. Fiddler’s generation of the script is brute-force so each request has all the headers listed individually instead of being shared across the transaction. Let’s try and fix that by pushing most of those headers to the default section.

This is definitely much cleaner but there is a problem. The way a transaction works in WCAT is that each request is performed serially waiting for the response each time. So we couldn’t do something like request video and audio at the same time. To achieve that, let’s split the requests into two equally-weighted transactions. Also, the requests don’t need ids so let’s remove that as well.

This will work decently well but there is no way to synchronize transactions in WCAT. Another problem is that while the above may work for simulating the buffering a media player will do, it doesn’t simulate what happens after the buffer is full and the user is watching the content. If your media content is relatively short then this isn’t much of an issue. However, if you’re trying to simulate streaming a movie or television show, the majority of users are requesting fragments on a cadence of two requests every two seconds (or whatever the fragment duration is).

You could try to handle this with a sleep:

The problem here is that the sleep is not executed until the prior request receives a response. So if the prior request gets a response in 150ms, the next request is 150ms later than it would be with a real player. Unfortunately there is no way for WCAT to sleep a dynamic period of time.

In either approach, the load generated will be inconsistent from run to run. It would be much better if the load could be throttled somehow. Luckily there is an undocumented feature of WCAT that allows you to throttle the requests per second. WCAT will automatically sleep between requests to keep the rps from going too high.

If you are targeting a specific network bandwidth like 200 Mbps you might be tempted to try using “throttlebps” since the WCAT documentation has a throttle and minbps attribute on the scenario element. However, “throttle” is invalid and “throttlebps”, while a valid attribute, doesn’t work. In my testing “throttlerps” works pretty well. Unfortunately throttlerps applies to the whole scenario and not to a particular transaction. So if you want to keep audio and video requests to a particular rate you could either figure out a workable average or have separate WCAT client machines for each track. Then you would also need to coordinate the machines since the scenario file is pushed by the WCAT controller and to run separate scenario files you’d have to use separate controllers.